Home » Product Guides » Cast Iron Cookware: A Must for your Kitchen 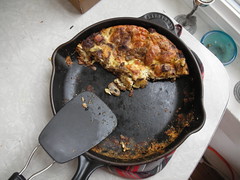 Ask a professional chef what type of pots and pans you need in your kitchen.  Most would recommend at least one piece of cast iron cookware in every kitchen because of its versatility and even heating qualities.  If you have one of your grandmother’s skillets, perfect!  If not, here’s some information to help you decide what type of cast iron pot or pan is best for what you like to cook.

Cast iron can be used to cook just about anything.  A cast iron fry pan or skillet is best used for frying, be that crunchy southern fried chicken or chicken fried steak, or fatty meats.  In general, cast iron cookware will give you the most delicious results with food that needs a slower method of cooking.  The reason is that when you cook stews, chilis, even certain soups (especially Grandma’s old recipes) in cast iron, it takes longer to heat, so flavors have more time to interact and blend with each other.  An absolute essential piece of cast iron cookware is a Dutch oven.   You can even use it for frying, if you only have room for one piece of cast iron cookware.   Cast iron cookware also increases the richness and complexity of slow cooking dishes, again because of the longer cooking time.   Another great use for cookware made from cast iron is for preparing cheaper cuts of meat.  The blending of seasonings, spices and sauces coupled with long cooking times tenderizes meats better than cooking these dishes in other types of cookware.

Cast iron cookware comes in two exterior finishes:  Enameled, which features an exterior coating found in brands such as Staub and Le Creuset; and non-enameled, which does not have exterior coating found in brands like the American-made Lodge.  The non-coated cookware Grandmothers (or Great Grandmothers) used has been around for ages.  Enameled cast iron is a bit newer.  Staub began producing it in 1892; Le Creuset in 1925.

You can choose from a wide range of cookware styles in cast iron.   Each type of pot or pan tends to be used for specific types of cooking, though many are interchangeable.  Cast iron is great for creating consistent heat from an inconsistent heat source.  It’s also ideal for food that requires long periods of cooking, such as stews.

Cast iron pots and pans can range in size from .25 quarts up to as large as 13 quarts.  As with stainless saute and fry pans, you can also find cast iron skillets as large as 14 inches in diameter.

Every chef says you need one piece of cast iron cookware because of its versatility.  We have two favorites in our kitchen.  One is a fairly large cast iron dutch oven (also know as a french oven or cocottee).  It’s about 8 to 10 quarts.  It gets lots of use in the winter for our favorite chilis, stews and roasts.  Our other cast iron staple is a small roaster, about 4 quarts that we use for Mom’s chicken dumpling soup.  It also is great for roasting chickens with a few potatoes for an easy one-step meal.

Some things to consider when shopping for cast iron: