Japanese knives come in just about as many styles as European knives. Each Japanese knife style has a specific purpose – some similar to Western-style knives, and others not so similar. In this article, I’ll go through the major styles in Japanese cutlery that we carry here at MetroKitchen.com and explain some of their uses and advantages.

Somewhat resembling a chef’s knife with its curved edge, the deba is unique because of its incredibly thick blade. In use, it works more like a combination of a cleaver and a butcher’s knife. I’ve seen chefs use deba knives for chopping meat, filleting fish, and even for cutting bone. The blade is extremely thick, making it suitable for cutting whole chicken or other meat with small bones.

Deba knives commonly have single-bevel blades, meaning that the blade is only sharpened from one side. This makes it easier to sharpen them with a whetstone and consistently get the same sharp edge.

Although the deba resembles a chef’s knife in appearance, the Japanese knife that functions most like a chef’s knife is the santoku. A santoku knife is normally much sharper than a European-style cook’s knife. Unlike the deba knife, the santoku normally has a double-bevel blade, like most European-style cutlery. It also has a straight edge. This makes it good for regular chopping and slicing. It’s perfect for cutting vegetables, mincing herbs, or slicing boneless meat. For cutting bones, a deba is more appropriate because of its thicker blade. 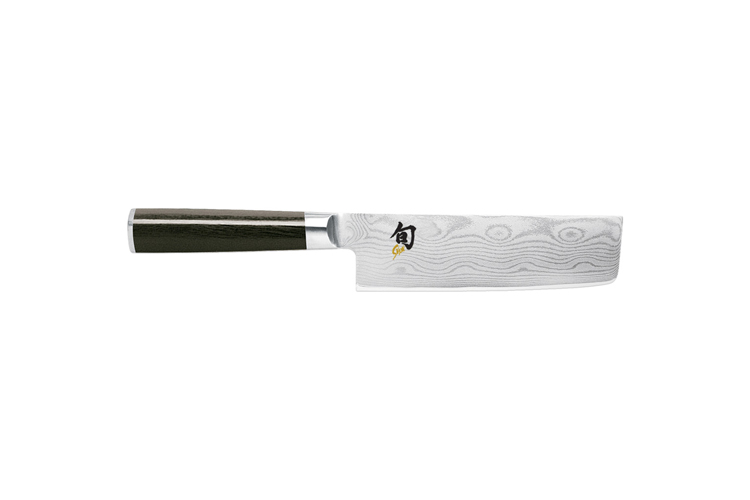 The nakiri knife, or usuba knife, is a Japanese vegetable knife. It’s made for chopping vegetables with an up-and-down motion and no horizontal pushing or pulling.  The blade is about as thin as a chef’s knife. A nakiri and an usuba are essentially the same type of knife, but one is called a nakiri knife when it has a double-bevel blade, like a chef’s knife. It’s called an usuba knife if it has a single-bevel blade, like traditional Japanese cutlery.

Yanagi and tako sashimi slicers are made specifically for slicing sushi and sashimi. Tako slicers have a rectangular-shaped blade and are made specifically for cutting octopus. Yanagi slicers are made for cutting other fish like red snapper or tuna. Sushi chefs have very particular conditions for properly cutting sushi, so these slicers were specifically designed to meet those requirements. They are long and are meant to be used only with a pulling motion, and never pushing, to achieve consistent texture among slices. The blade is normally thin and sharp with a single-bevel edge for consistent and easy slicing. Also, the back of the blade is usually somewhat concave so that pieces of fish can easily fall off of the blade when cut.